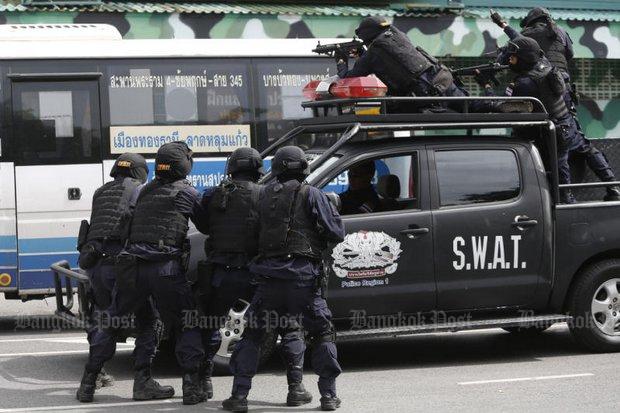 Almost 100,000 foreign nationals who have overstayed their visas have been targeted by authorities who are ramping up efforts to weed out transnational criminal gangs from Bangkok and other major tourist provinces.

Police believe some foreign nationals who have overstayed their visas may be involved in various criminal activities.

Deputy Prime Minister and Defence Minister Prawit Wongsuwon has instructed military, police and administrative officers to work with state agencies to intensify efforts to apprehend those linked to transnational criminal networks across the country, particularly criminals who entered the country on tourist visas, according to Defence Ministry spokesman Kongcheep Tantravanich.

The Royal Thai Police has been told to beef up measures to track down, arrest and prosecute those who either entered the country unlawfully or have overstayed their visas, in violation of the Immigration Act, Lt Gen Kongcheep said.

“Almost 100,000 foreigners were found to have overstayed their visas,” he said, adding Gen Prawit had also warned officials against taking advantage of these people.

According to Lt Gen Kongcheep, security officers have toughened campaigns to investigate and arrest transnational criminals after various tip-offs from the public.

Raids have been carried out in the Nana, Phra Khanong, On Nut and Ramkhamhaeng areas of Bangkok as well as border locations and major provinces and cities, such as Chiang Mai, Pattaya of Chon Buri, Songkhla, Phuket and Koh Samui in Surat Thani, the spokesman said.

Please credit and share this article with others using this link:https://www.bangkokpost.com/news/general/1359415/foreign-gangs-in-government-crosshairs. View our policies at http://goo.gl/9HgTd and http://goo.gl/ou6Ip. © Post Publishing PCL. All rights reserved.